Are you in a hurry like I am in the morning. I am always on my way out and I never have time do my hair until now. I am the type that just throws my hair up in a pony tail or bun and I'm good to go. Recently I received the Speed Brush Collection in the mail and let me tell you I fell in love! 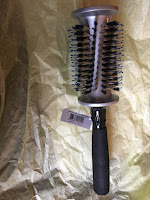 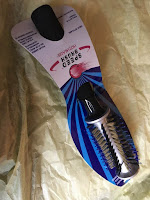 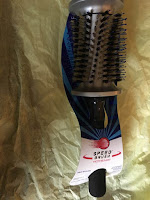 I received three of their brushes in the mail for review. I received a small, medium and larger brush. I know what your thinking why are they brushes special? Well these brushes are supposed to cut your hair blown time in half with these brushes and let me tell you they sure do. I know your also thinking will these brushes be good on my kind of hair? Yes they are these brushes are perfect for fine, normal to thick hair and chemically treated hair. These brushes are mad using a patented 3d bristle pattern which black boar for control and tension, white boar for polish and shine and flexible nylon for penetration. This brush also uses thermal conductive technology for faster heat styling that will help with frizzing hair and having your hair tangle.

I used the smaller brush on my 7 year old daughter bangs and it worked wonders. I also used the medium size brush for the rest of her hair. I was getting her hair ready to go out to give it a little more volume because she loves when I do something with her hair. When I used the brush and it gave her more volume when I blew dried her hair and her bangs looked like it had more volume also. I was really impressed with these brushes. I would definitely recommend having these brushes in your bathroom for your morning routine!

You can find these brushes just about anywhere and they retail for about 24.29-41.29 deepening on the sizes. Also you can find their products on HotheadsHairbursh.com

Below we have a special teaser for the score-only version of Star Wars: The Last Jedi, which is available exclusively on Movies Anywhere for a limited time. Simply sign-up for Movies Anywhere and link your digital retailer account where you purchased your digital copy in order to unlock it!